Eclipse in 2021 by AstroSage offers necessary information about all the eclipses occurring in the year 2021 to all the readers. Know more about the next Solar Eclipse in 2021 and Lunar Eclipse 2021, how the planets Sun and the Moon undergo this celestial phenomenon and what factors determine its occurrence. 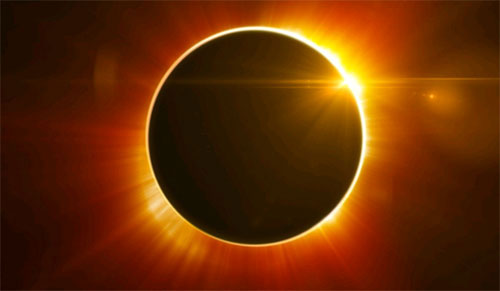 In this article, apart from the list of all occurrences of the Solar Eclipse 2021 and Lunar Eclipse 2021, we will provide you with other necessary detailed information. Not only will we discuss the date, time, duration and visibility of the eclipse in 2021, but also understand in detail the astrological and religious aspects of this astronomical event along with necessary remedies to follow and get rid of malefic effects. Know what special precautions you should take during the Sutak Kaal of every Eclipse and much other information.

A Solar Eclipse is an event that occurs when the Moon passes between the Earth and the Sun. In such a case, the Sun is either partially or fully covered. In astronomical science, this phenomenon has been described in such a way:

Usually, the Earth revolves around the Sun, whereas the Moon revolves around the Earth. However, at times, there are situations where while moving in their own orbits, the Moon comes in between the Sun and the Earth. During this time, the Moon covers the Sun’s light either partially or completely and prevents it from reaching the Earth’s surface. With the sudden darkness prevailing all over the Earth, this phenomenon is commonly known as Solar Eclipse in Science, which takes place on the day of Amavasya since The Moon isn’t visible from the Earth.

Types of Solar Eclipse in 2021

As per the Hindu Panchang, this eclipse will occur on Thursday, June 10 afternoon, from 13:42 till 18:41 in the evening.

The first Solar Eclipse of the year as per Eclipse 2021 will be visible in the Northern parts of North America, Europe and Asia, in North Canada, Greenland and Russia but not in India. Since it won’t be either visible fully or partially in India, the Sutak Kaal will not be observed.

The second Solar Eclipse of the year 2021 will be visible in Antarctica, South Africa, Southern part of Atlantic, Australia, South America but not in India. Since it won’t be either visible fully or partially in India, the Sutak Kaal will not be observed.

Like a Solar Eclipse, a Lunar Eclipse also refers to that celestial event, when the Earth revolves around the Sun in its orbital path, and the Moon, while revolving around the Earth, lands behind its shadow. In such a case, all three of them i.e. the Sun, Moon and the Earth stand in one straight line. This unique event is known as the Lunar Eclipse, which takes place on a Full Moon Day.

Usually, the type and duration of an eclipse depends only on the position of the Moon. So let's now know in detail about the Lunar Eclipses occurring this year:

Like the Solar Eclipse, two Lunar Eclipses in 2021 will occur in the year 2021. The first occurence will be visible on 26 May, followed by the second on 19 November 2021.

Note: Timings given for the above table are as per Indian Standard Time (IST). Since this is a Total Lunar Eclipse but visible in India as a Penumbral Lunar Eclipse, the Sutak Kaal and its impact will not be religiously observed widely.

This will be a Full Lunar Eclipse in 2021 visible in East Asia, Australia, the Pacific Ocean and the US, but in India, this phenomenon will be visible as a Penumbral Lunar Eclipse.

Note: Timings given for the above table are as per Indian Standard Time (IST). Since this is a Penumbral Lunar Eclipse but visible in India, the Sutak Kaal and its impact will not be religiously observed widely.

The second and last Lunar Eclipse of the year 2021 will occur on 19 November, 2021, Friday from 11:32 in the morning till 17:33 in the evening. This will be a Penumbral Lunar Eclipse, and visible in India, America, Northern Europe, East Asia, Australia and some regions of the Pacific Ocean.

Sutak Kaal During Eclipses in 2021

Sutak Kaal in Vedic Astrology is regarded as an inauspicious period before the occurrence of a Solar or Lunar Eclipse, during which every person should refrain from doing any kind of auspicious activity. This is because as per the scriptures, any auspicious activity carried out during the Sutak Kaal offers unfavourable results. However, religious scriptures also offer some remedies and tips that can be performed to get rid of the malefic effects of Sutak Kaal. Moving on, let us know how the time of Sutak Kaal is calculated during the Eclipse in 2021:

As we have already told you above, as per astrology, carrying out any kind of auspicious activity during the period of Sutak Kaal before any eclipse is forbidden. In such a case, it is important to calculate the duration of this period. For this, it is necessary to find the accurate time of occurence of the Solar Eclipse 2021 or Lunar Eclipse 2021. After this is figured out, it becomes easy to evaluate the accurate time when the Sutak Kaal is commencing.

Eclipse in 2021: Do’s During The Sutak Period

Get Your Free Kundli Now With Online Software

Eclipse in 2021: Don’ts During The Sutak Period

Precautions To Be Taken By Pregnant Women During Sutak Kaal in Eclipse 2021:

Mantras To Chant During Sutak Kaal

As per the scriptures, natives must chant the below mantras to escape the ill-effects of eclipses in 2021:

Mythological Importance Of An Eclipse

There are innumerable mythological beliefs related to the Solar Eclipse in 2021 and Lunar Eclipse in 2021, but among them the story of Rahu-Ketu is very famous. According to the same legend, it is believed that due to the enmity shared between Rahu-Ketu and Sun-Moon at the time of Amrit Manthan, this phenomenon of eclipse happens every year.

This enmity was born when fourteen different types of gems emerged from th4e ocean during the process of “Churning Of The Ocean”. Among them was the Nectar of Immortality or Amrit, which every God and Demon wanted to consume. On the other hand, any demon consuming this Amrit would have proven to be fatal for the world. Realizing this, Lord Vishnu made a plan and accordingly, took the form of the divinely beautiful Apsara Mohini to subdue all the Demons or Asuras and prevent them from consuming the Nectar.

During this time, the nectar was divided equally and people on both the sides started consuming the Nectar. Here, Lord Vishnu tricked the Asuras by offering them normal water instead of the Amrit, whereas the Devtas consumed the Nectar of Immortality. However, before all the Asuras getting tricked by Lord Vishnu, a demon named Swarbhanu understood the plan and after falsely taking the form of Devtas, stood among them.

When Lord Vishnu in the form of Apsara Mohini offered the Amrit to Swarbhanu, Surya and Chandrama recognized him and alerted Lord Vishnu. However, by then, Swarbhanu had consumed some drops of the Amrit. Enraged by this trick, Lord Vishnu severed the body of Swarbhanu into half with his Sudarshan Chakra. Since he had become immortal, he didn't die, which is why his head became Rahu, whereas his torso became Ketu.

Since Lord Sun & Lord Moon revealed the true identity of Swarbhanu, it is believed that Rahu and Ketu, due to their ongoing enmity, create an eclipse over the Moon and Sun every year.

Advanced Health Report Will Put An End On Your Health Troubles!

We hope that you have liked our article on Eclipse 2021. Thank You for staying with us!