Planet Sun in Astrology has a special significance in Vedic Astrology and in Hinduism. Sun is the main source of energy and light on planet Earth. Astronomically, it is a “Father of Stars” and very nearest to our mother planet “Earth”. It is largest among all planets. It is considered as a centre of entire solar system. Though it is a star astronomically but it is considered as Planet in Vedic Astrology and an important planet while analysing the birth chart. 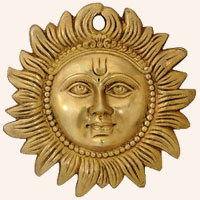 In Hinduism, planet Sun is worshipped as “Sun God”. It provides life, force and energy, most importantly “the pran”, that means it is a planet which represents our “Soul” in Astrology. People pray to the planet Sun thrice a day. It represents our high esteem. People do “Surya Namaskar” in order to regain the vitality and eyesight on Sundays.

It is believed, the creator of Universe, Brahma did the survey with his four faces in four direction, causes four seasons and four elements named as Fire, Air, Earth and Water. The day, allocated for Sun Planet, is Sunday. Sunday is kept on the top or at head of the all seven days in a week.

In Western Astrology, planet Sun is also known by the name “Apollo”. They consider it as a son of “Jupiter” and “Latona”. Apollo is a brother of “Diana”

According to Hindu Mythology, the moment when Sun enters into any Zodiac sign, it is considered as auspicious time to perform any religious work. They perform religious function to satisfy their soul as well as offer pray to Sun God.

Hindu Calendar or Panchang is also based on movement of Sun in different Zodiac signs. When Sun enters from one sign to another sign, then it is considered as one Solar Month. Hence it takes one year to round the ecliptic. It does not retrograde like other planets.

Sun is one of the luminaries along with Moon in Universe. These two emit light, which brighten the whole world. Sun governs inspiration and expiration i.e. the life span or duration of life. It gives you the force and self will to make yourself determined and decisive.

It is a masculine, dry, positive and hot planet. He is “Agni Devta”, name of an Indian Devta. It is fiery in nature. It rules “Eastern Direction and “Grishma Season”, in the months of June and July. The colour of Sun is orange or Kanakambaram. It rules over the metals like copper and Gold.

What does Sun signify in Vedic Astrology?

Physical appearance: People born under the strong influence of this planet have large and round face. They will born with Leo Lagna or on Sundays and with the honey coloured eyes. Sun represents hearts in your body parts and hence Leo sign indicates heart in natural Kaal Purush Kundali. It also represents the right eye in man and left eye in woman.

Diseases: Since it represents heart of a person, hence it indicates heart diseases as well as problems in eyesight, if it is afflicted in kundali. Sun is afflicted by Saturn , then it may cause low blood pressure whereas Sun afflicted by Jupiter causes High Blood Pressure. It also denotes cerebral meningitis, eruptions of the face, aphasia, sharp fevers, typhoid, polypus, epilepsy, bile complaints, sunstroke, scorches and disease in head etc.

If Sun is placed positively in your Birth Chart, then it will bless you with sterling qualities. It will be very beneficial for you. It provides you real love towards everything and everybody. You will have good intuition power and inspiration. It indicates you self acquisition.

Strong Sun: means placement of Sun in favourable sign, which provides good results and strong will power to accomplish any task. You would have cheerful attitude towards life and enjoy the blissful life with good fortune. Sun is the planet which gives power to rise high in life, due to which you get the recognition in the society. It gives magnetic quality and ambition to the person.

What are the professions generally denoted by planet Sun?

In general, Sun is the karaka planet for permanent position in life. Sun denotes all government services and such departments. Wherever, there is safety and security in service, Sun would be ruling over it. It also represents the independent business financed by the Father. The stream of profession also depends on the PAC (Position-Aspect-Conjunction) connection with the other influencing planets. In short, we can say that the nature of Planet Sun in profession or career varies with the combination of Sun with the other planets. Here are some professional fields, related to things, listed below for your better understanding:

The day governed by the Sun is “Sunday”, one may expect better results on this day itself if he is running with the Mahadasha of “Sun”. Sun rules over “Leo” Zodiac sign and gets exalted in “Aries”. The precious gemstone for planet Sun is “Diamond” and “Ruby”.

Hence planet Sun is very prominent in terms of Astrology as well as Astronomy. The life exists due to light energy of planet Sun on earth. It provides energy to everything and everyone in order to sustain and also a biggest source to give you a hope for new beginning.

Sun in various houses according to Vedic Astrology

Sun in various zodiac signs according to Vedic Astrology

Sun in various houses according to Lal Kitab