Planets in Astrology are prominent to derive the life of Human Beings. Planet Mars in Astrology plays a vital role in Vedic Astrology as it represents our source of energy and is also important in Hinduism. Astronomically, Mars is one of the outer planets like Jupiter and Saturn. Our Mother planet Earth and Mars both rotates around Sun at a different speed. Mars rotates in outer side of the circle traced by the Earth. Only Venus and Mercury can appear in inner circle or between the Sun and Earth. However, sometimes, Moon can also be seen in between Sun and Earth on certain occasions. Mars is red in color and its light is ruddy. It shines during the night, hence everyone can notice it without any failure. It can be distinguished very easily. 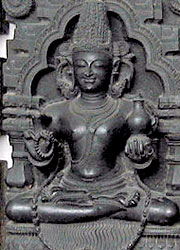 As per Hindu Mythology, Mars or Mangal is known as Bhoomi Putra. He is the son of Mother planet Earth. The old literature of ancient India also declares Angaraka the son of Earth. Mars is also further identified with Kartikeya, the god of war. It is believed that when Earth was submerged in the vast expanse of sea, Lord Vishnu lifted the Earth in his Varaha Avatar, brought it out and placed it in a suitable orbit.

Mother Earth became grateful and asked for a feminine boon. God agreed on providing a boon. As a result Mangal was born with the godly union. Hence this story relates to Mars being the son of Lord Shiva and mother Earth.

In Hindus, Mars is also seen as the godly representation of God Muruga, Subramanya, Kumaraswamy, Velayudham or Vadivel. He is also considered as Commander-in-Chief of celestial bodies. It also rules over “Samveda”.

In Western Astrology, It is believed that the Mars is the deity of Buddhists and God of Romans. It is also considered as God of War and Hunting. The other name of Mars is Kuja in Sanskrit and Sevvai in Tamil. He is also a God of Disputes, Destruction and War and God of Energy and Force.

Mars is dry, fiery and masculine by nature. Mars owns two signs named as Mesh or Aries and Vrischika or Scorpio. It gets exalted at 28 degrees in Makara or Capricorn sign whereas debilitated in Cancer or Karkata at 28 degrees. Mooltrikona rashi is Aries or Mesh. He has high stature and blood red complexion. It has much to do with one’s desires and ambition. It symbolizes the senses. In general, it is said to be a malefic planet. It bestows you with a quick mental activity and extraordinary muscular strength, strong determination, ambition to come out successfully in material field, leadership quality. It gives you a chance in every arena of life you desire for.

What does Mars signify in Vedic Astrology?

Mars represents the “younger siblings or specially brother” in native’s birth chart. It rules over first house and eighth house in Kaal Purush Kundali in Vedic Astrology and the significator of third house and fourth house. Third house is the house of valour with Mars holding this position in horoscope. Likewise, Sixth House is house of Debt, Diseases and Enemies and again Mars can do much better in this house as it has good fighting ability, that will provide you the force to cope up better in the areas associated with sixth house. Let’s understand below what it signifies:

If Mars is placed positively in your birth chart, then it bestows you with a good personality. It will become very beneficial for you. It provides you with valour, energy and force to compete with your enemies, debt, diseases and competitions. You will be very quick minded and will not take much time to take decisions. Let’s see below how Mars confers good, medium and bad results:

What are the professions generally denoted by planet Mars?

Being a fiery planet, a native may get employed in defense sectors like military, police, in arms and ammunitions etc. Hunters and gunners also have a strong influence of Mars over 2nd, 6th or 10th house. Chemists, dentists, surgeons, butchers and barbers are governed by the planet Mars. Those who deal in iron and steel, kitchen, boilers, steam engines etc., are under the rule of Mars. It also denotes factory, dealers in corals, ruby, red articles, thief, robber, dacoit, murderer etc.

Professional streams also depend on the PAC (Position-Aspect-Conjunction) connection with other influencing planets. In short, we can say that the nature of Planet Mars in profession or career varies with the combination of Mars with other planets. Here, we have listed below few professional fields for your better understanding:

The day ruled by Mars is “Tuesday”, one may expect better results on this day itself if he is ruled over the Mahadasha of “Mars”. Mars rules over “Aries” and “Scorpio” zodiac signs. The precious gemstone for planet Mars is “Red Coral”. All red stones are governed by Mars.

Mars in various houses according to Vedic Astrology

Mars in various zodiac signs according to Vedic Astrology

Mars in various houses according to Lal Kitab