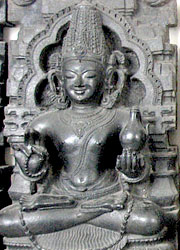 Venus is glorious and luminous planet in solar system. Planet Venus is very much close to the Sun than the Earth. Mercury (Budha) and Saturn (Shani) are friendly but Sun and Moon are unfriendly to Venus. Jupiter and Venus are said to be enemy, as Brihaspati is Dev Guru and Venus is Asura Guru, but they both do not clash in heavens. Shukra grah presides over Shukravar or Friday. Venus is the ruler planet of second zodiac sign Taurus (Rihsabh) and seventh zodiac sign Libra (Tula). Venus represents contentment of material life, artistic quality, and all perceptible gratifications of life like wealth, reproduction or etc. Venus is regarded as one-eyed, so ill-posited Venus in ones horoscope affects his eyes. Venus rules over our eyes, generative system, throat, chin, cheeks and Kidneys. Venus forming good connection with other planets like Sun, Moon and other planet in ones chart indicate positive influence for his life, but evil aspects of Venus with other planets definitely endow bad results for the native.

Planet Venus is second planet from Sun in solar system. Average distance between Sun and Venus is 67 million miles. Size and Gravity of this planet is much similar to planet earth. In night time, this planet is brightest object in sky. Venus is sheltered with a dense coat of clouds of sulfuric acid, which makes it unclear for seeing it even in visible light.

Venus is brilliant, brightest, and feminine planet. It is regarded as the Goddess of love, marriage, beauty, and comfort. Hindu people regard Venus as Goddess Mahalakshmi-wife of Lord Vishnu. Venus is Aphrodite for Greek people, Nana for Babylonians, and Astoreth for the Hebrews. Other names of Venus were also Lucifer and Hesperus. The Planet Venus governs the Yajur Veda (a Hindu Vedic scripture). And among months, April and May or Vasanth Rithu come under this ruling planet.

Planet Venus is Shukra Grah in Vedic or Indian Astrology. Shukra Grah is also known as Guru of Asuras (Mentor or teacher of Devils) by Vedic Astrologers, and hence, he is also famous as Shukraacharya. Vedic Astrologists believe that Shukra Dasha or Planetary period of Venus remains active in ones horoscope for almost twenty years which bestows a person all amusements of material life. If this planetary period of Venus is posited well in ones horoscope or chart, it is believed, the person will have the affluence, good times and abundant comforts in his life. Venus or Shukraacharya lost his one eye because of a pierce given by Lord Vishnu, thus he became one-eyed. So, ill-posited Venus in ones horoscope affects the persons eyes.

Influence of benefic and afflicted Venus in one life

Venus with Sun: When Sun forms favorable aspect with Venus in natives chart, the person will have amiability, happiness, easy life luxury or etc. He will be soft and polite and will respect others humbly. Gain of money through business partners and life-partners (wife or husband) are also indicated here. Success, rise of income is indicated in each fresh opportunity. But if Venus forms unfavorable conjunctions with Sun, the native will have an unhappy and disharmonious life. He will face delays in his marriage.

Venus with Moon: The person, born with the ruling planet Venus and shows that Venus and Moon has formed a good aspect in his chart, will be an affectionate, attractive, and a gentle individual by its nature and appearance. But adverse aspects can make the natives life terrible.

Venus and Mars: Mars and Planets are said to be different from each other and both show different qualities. Planet Mars is bold, masculine planet whereas Venus is calm and feminine planet. Thus, if both form favorable affiliations with each other it endows the native a unique characteristics. The native will be well-behaved, ambitious, amorous and a charming individual. Adverse aspect of both can make the person immoral, violent, and rash. In can also bring the divorce in natives marriage life.

Venus and Mercury: Favorable conjunctions of Venus and Mercury make the native nice-natured. He will have a quality to generate fun and pleasure in family and friends. He can be a creative person and can enter in profession like literature, dram-writing, comedy, poetry, engineering or etc. Adverse aspect of Mercury and Venus indicates extreme anxiety, harm in reputation or etc.

Venus and Jupiter: Both Jupiter and Venus are brightest and strong planets by nature. If Jupiter is in favorable connection with Venus, the native will be faithful, successful and a gentle person.