This is third part of a weekly series on learning Indian astrology by famous astrologer Punit Pandey. To read this article in Hindi, please click here.

This week we will learn how to interpret diagram of a birth chart. We will also get to know concepts like ascendant and house etc.

A birth chart tells about the position of planets in houses and signs. We have already discussed about the planets and zodiac sings, and we will talk about houses a little bit later. In north Indian diagram of birth chart, ascendant sign is written on very first place and then signs are shown from right to left. It means signs are depicted âanti-clock wiseâ and the number corresponding to zodiac sign is shown in each box. It can be understood better with following example chart: 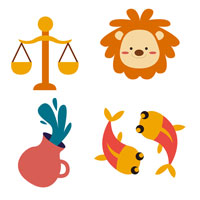 To understand what is house, we will have to forget all the numbers and names of planets in above example chart for a while. Above birth chart diagram can be decamped in 12 boxes, out of which eight are triangular and four are rectangular in shape. In these four rectangles, topmost rectangle is considered to be âascendantâ or the âfirst houseâ. This It has been depicted in gray background in above example chart. Position of ascendant is always fixed in the birth chart. So when we have to find out ascendant, we look at the position of grayed box above. Anything written in that gray box will be called in âfirst house.â

When we start counting anti-clock wise from first house, the next position arrived thus is known as second house. The next one from second house is called third house and so on. In Sanskrit, house and ascendant are known as bhaav (à¤­à¤¾à¤µ) and lagna (à¤²à¤à¥à¤¨) respectively.

As we know, âhouseâ and âsignâ are two different concepts. The numbers written in horoscope denote zodiac signs, e.g. â11â can be seen written in first house, which shows that eleventh sign i.e. Aquarius is in ascendant or first house. Similarly, the 12th sign or Pisces is situated in second house. We have studied in previous lesson that lords of Aquarius and Pisces are Saturn and Jupiter respectively. Therefore, in astrological language we will say that lord of first house is Saturn (because â11â is written in first house). In same manner, lord of second house is Jupiter.

Position of planets in houses

If we start counting from gray rectangle to the house where Venus and Rahu are placed in example chart, we will count up to 5. Thus, we can say that Rahu and Venus are posited in fifth house. Similarly, Moon and Mars are in sixth, Saturn, Sun and Mercury are in seventh, and Jupiter and Ketu are in eleventh house. This is known as position of planets in different houses.

Position of Planets in signs

That's it for now. Logging off â Sayonara.