The Planet Moon - Astrology, mythology and influence in Horoscopes 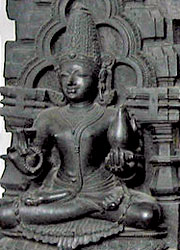 When the Sun sets in evening and dim light comes to cover the earth, a disk - shaped 'Moon' appears to illuminate the sky and to dispel the darkness. Indeed, 'Full Moon' is really a stunning object with tiny starts to garnish the sky in nighttime. Moon is also conceived as a 'queen of night'. Since ancient times, moon's phases are also momentous to influence significant aspects of human lives. In religious country like India, devotee people arrange important 'katha - pooja' and ladies keep fasting during 'Purnima' (Full Moon) day. For all important rituals and fasts of Hindus, 'Moon' is one of the prominent deities for them. Seeing phases of Moon, 'yearly moon calendar' is formed for knowing some auspicious tithis (dates). The astrological day for moon is 'Monday'. Further, ebbs and tides of ocean on earth also get impacted due to gravitational force of moon. 2 and 7 are the numbers of Moon, but number 8 is unfortunate. White and Sea-green colors are indicated by Moon. Being a watery planet, it is concerned with liquids, aquatic, animals, and objects found under water, like pearls. Moon symbolizes family life and private affairs.

Moon's identity in the Universe

'When Sun is the main ruling planet (Karka) for fathers, the rulling planet for mothers is Moon'. Moon is the nearest planet and the only known natural satellite of earth. It is just about two lakh thirty eight thousand miles away from the earth. The diameter of the Moon is approximately 2,200 miles and it is small in size comprised with crust, mental and core. In a strict dictionary terms, it is not a planet, but finding astrological notions, we call it the 'Planet Moon'. In the solar system, Moon is acknowledged as the fifth largest and the second densest satellite. It is the only celestial body on which human beings have gone for successful research. It moves round the earth and earth revolves around the sun. Moon does not perceive light from sun when the earth comes in between them and it causes 'Lunar eclipse'. And, in this condition, Moon stops illuminating light.It shines only by getting the reflected light from the Sun, as it is not a self-luminous like Sun. Moon is also conceived as conductor of power lent by Sun.

Diverse of cultures around the World reveal varied interesting myths about the Moon. Western mythologists believed that Moon is Virgin Mary of the Roman Catholics and nourishing mother of the heavens. She is also the 'Luna' or 'Diana'. She is the Goddess and a huntress and rules chastity as well as fertility. Moon rules over the impregnation, notion, birth of child, the animal instinct, and influence one's personality and life. It is believed that the planet Moon governs person's infant stage, and whatever behavior and all-over personality we see in that person is because of influencing power of moon.

India is a land of innumerable spiritual beliefs where Hindu people are always ahead to hoist the flag of religious thoughts. For them, the Moon is one of the prominent lords and they enunciate moon as 'Chandra Dev' (Lord Moon). Every after fourteen days Moon changes its appearance envisaging 'Full Moon' and 'New Moon'. Hindu people say 'Purnima or Poonam' at the time of Full Moon, and 'Andheriya or Amavsya' at the time of New Moon. According to Hindus myths, one day, the lord Moon was giggling on physical structure of 'God Ganesha'. Seeing this ironic behavior of Moon, Ganesha gave a bitter curse to him that his beauty will become ugly and no body will see his terrible black face in future. Experiencing this utmost ire of God Ganesha, Moon really repented and apologized for his behavior. And, finally, God Ganesha forgave him and said "no curse can be taken back but yes, you can show your complete beauty every after 14 days or in day Poornima". Thus, till now moon is categorized in two phases one is 'Full Moon' and second is 'New Moon'. Lord Moon is vital wing of some auspicious occasion like 'Ganesh Chaturthi' and 'Karvachoth'as well.

According to astrological belief, Moon is a cold, asymmetrical, humid, amenable and feminine planet, which rules the fourth zodiac sign 'Kark or Cancer'. It is conceived that the planet Moon orbits around 13 degrees on an average daily, and whenever it passes zodiac sign Taurus or Rishabh, it seems strong. But, whenever it transits Zodiac sign Scorpio or Vrishchik, it gets very feeble and incapacitated. The influence of moon occurs on the relative disposition of other planets the aspect which moon receives, the sign which it occupies etc. at the time of one's birth.