Do you want to take your business to new heights or want to make sure that decisions taken by you bestow you with eternal bliss? We are sure you want it. To help you make these dreams a reality, we have come up with Pushya Amrit Yoga, a duration that has potential to transform your future into a success. 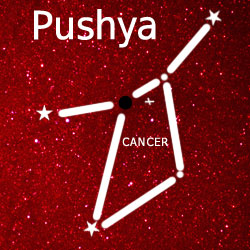 One of the most divine and sacred Yogas in the field of astrology is ‘Pushya Amrit Yoga’. Among all the Nakshatras, Pushya Amrit is the most powerful and significant. Even if it gets hampered by any Nakshatra, Pushya Amrit still yields fruitful results. Here, in this article, we will know all about Pushya Amrit Yoga including the dates for 2015. Let’s start with some facts about it:

Below are given the accurate dates of Pushya Amrit Yoga 2015 along with correct timings:

Pushya Amrit Yoga represents courage, strength, care, luxury, luck, and success. Ruled by the planet Saturn , this is eighth among all the Nakshatras (constellations). But, its governing deity is Jupiter ( Guru ). Guru Pushya Amrit Yoga is an excellent day to worship the Goddess of wealth, Lakshmi. Reason behind is the belief that she was born on Pushya Amrit Yoga. For all those who are waiting for that auspicious time when they can initiate a new venture or invest their money in gold, Pushya Amrit Yoga in 2015 is the ideal day. Worshiping Goddess Lakshmi will increase your wealth further.

To gain maximum benefits from religious and spiritual activities, you should begin these auspicious deeds under Pushya Amrit Yoga. Be it any Puja, Havan, or religious ceremony, organizing it in Pushya Amrit Yoga will help you for all the right reasons. This highly fruitful Yoga will help you in pleasing the deities in the best way; thereby, getting their eternal glory and blessings. Not only this, but it will also help you in increasing your good Karmas and reducing bad Karmas.

So, this was all we had for Pushya Amrit Yoga. We not only hope, but are very much sure that with this information given here, you will do every important task under the most suitable time. Pushya Amrit Yoga provided here is according to Hindu Panchang and is therefore, genuine and reliable. We wish you a good time ahead!